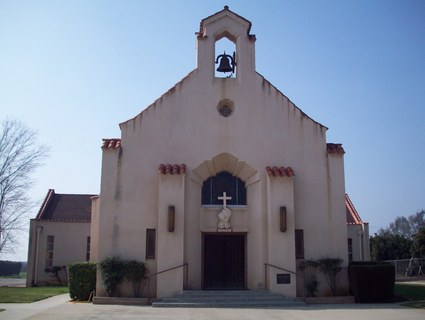 Zion Lutheran church was organized in October 1909 when fewer than six homes dotted the countryside of Terra Bella. In the early 1900s, two Lutheran men were on the board of the Terra Bella Land Development Company, one from Orange in southern California and the other from San Francisco. They were part of the “colonization company” and were encouraged to advertise in their Lutheran periodicals about this new development in the west. Ads were placed, stating that the land was suitable for growing citrus, fruit and nut trees, with the added inducement that if enough Lutherans would settle here the colonization company would donate one acre of land on which a chapel could be built. The ads were successful and attracted young married couples, single men, and families from various parts of the country. The Lutherans bought parcels of land, side by side, averaging around 20 acres each. Initially meeting for church services in the homes of the members, the Lutherans built their first church-school in 1910 and have expanded their facilities significantly since then. In addition to the church and school, the current facilities of the congregation include a multipurpose room with a meeting or gathering room, kitchenette, and offices for the church, pastor, and principal; a home for the pastor, a home for the principal, and another rental home next to the church. A cemetery for the members of the congregation is also located on the grounds to the east of the facilities. Zion is one of the few Lutheran churches in California that has not been relocated from its original rural setting. To our knowledge, Zion is the only California LCMS congregation located outside a general town site.